Why would anyone be surprised to find Southern Synagogues in the Bible Belt?

Life really is a journey of faith.  One of the great thrills of Andrew Schoolnik’s travels through the Deep South has been visiting old shulls.  These are, almost without exception, stately old buildings which display their grandeur.  These buildings have been home to countless religious events.  They have also witnessed the changing social landscape of the towns in which they stand.

Upon arriving at these magnificent synagogues Schoolnik was consistently met with welcoming kindness and warmth.  The Temple members, not surprisingly, showed loving-kindness to their new friend.  This was especially true of Ronnie Leet at Temple Mishkan Israel in Selma, Alabama.  Andrew is also grateful for having a chance rendez vous with the Institute of Southern Jewish Learning.  This happened during a visit to Temple Beth Israel in Meridian, Mississippi.  Was it really chance?  Schoolnik thinks it was bashert.

Finding some of these synagogues is relatively easy.  Their stately facades are on street corners in major cities which consequently makes them easy to find.  Schoolnik found this to be true of Temple Emanu-El and Tempe Beth-El in Birmingham, Alabama’s Five Points Neighborhood.  As a result of  these are building’s large porticos and large congregations that cannot be missed.  In addition, the same could be said for Touro Synagogue and Temple Sinai in New Orleans’ Touro and Audubon districts.

Southern Synagogues:  But They Can Be Easily Missed

Other of these southern synagogues are hiding in plain site.  Temple Mishkan Israel in Selma, Alabama, is on the main street (Broad Street) that leads to the famous Edmund Pettis Bridge.  Temple Beth El in Anniston, Alabama, with a large menorah affixed to the building’s front, is located in the center of Downtown Anniston.  While these Temples would seem to be easy to find, they are actually easy to miss while driving on the main road or simply walking down the sidewalk.

Southern Synagogues:  The Search is Rewarding

And then there are some that take some really looking.  These are Temples that are hard to find.  Temple Beth Israel in Meridian, Mississippi, for instance, is located behind a large residential neighborhood.  It is protected by both woods and a wrought-iron entry gate. Hebrew Union Temple is Greenville, Mississippi is almost in the shadow of the levy in this Delta town.  And Congregation Gates of Prayer in New Iberia, Louisiana, is tough to find because it’s in New Iberia, Louisiana, which is tough to find. 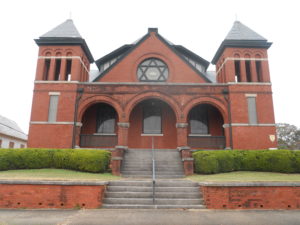